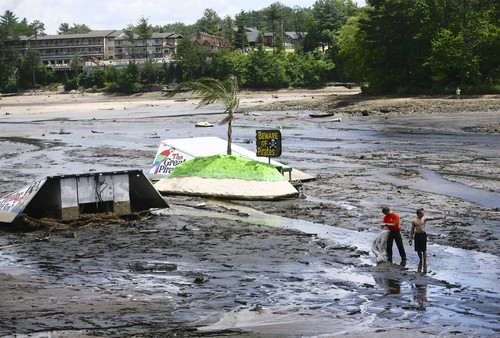 Photo by the Chicago Tribune

But there’s nothing abnormal about that, there’s a perfectly rational explanation for that. That doesn’t make it any less saddening though. Here’s what happened to one of the most scenic getaways for Chicagoans.

During the weekend, rained settled in over the surroundings of the lake; and it’s not just your average spring rain… it was way bigger than that. There was so much water that the lake practically burst its banks, releasing tens of thousands of lake water.On its path, the water took with it a roadway, several houses, boats, fish and lake bed.

It stopped just before Wisconsin river, but it was gone in a matter of hours. Now, about a day later, the lake is drained. It offers a desolating muddy landscape with fish that flap in the mud until they can move now more. Mounds of dead fish are piled high. The shoreline is jagged and cracked.

“Just this weekend it was full of fish, full of boaters, full of life and now it’s gone,” said Harland Tourdoy who has been fishing these waters for a half-century.

Is there something that can be done? I have no idea, but authorities could show a bit more interest in this matter, and save whatever’s left that can be saved.