by Mihai Andrei
in Environmental Issues, Science ABC
Reading Time: 2 mins read
A A
Share on FacebookShare on TwitterSubmit to Reddit 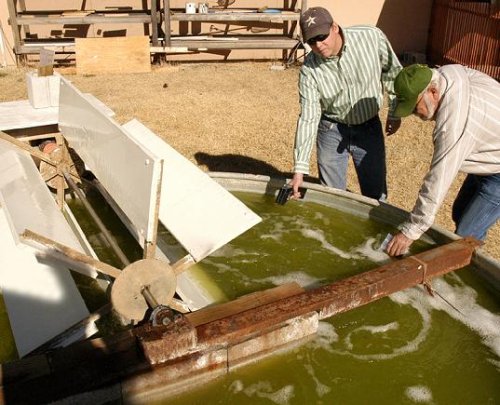 Due to the need for a constant development in alternative sources of energy and development, scientists have been turning their attention towards algae, which could prove the good answer to many questions raised by the current necesities. Algae are a very large and diverified group of photosynthetic organisms, crucial to marine life and numerous ecosystems. You’ve probably heard about algae based biofuels; the term has been tossed around in many situations, even in press releases or plain newspaper articles. But the thing is many people have little or no idea about what these biofuels are, let alone understand the whole meaning of the article.

First of all, algae based biofuels are not ready yet; they are currently under development. Everybody has seen a pond, or little lake or something. Water stays there, and algae grows and grows until it doesn’t allow sunlight to enter the water and algae is no longer produced at full capacity, due to its thickness and density. But take a moment and think about how the horizontal growth of algae could be put vertical, and light coming in horizontally. You would be able to attract more sunlight and contain more carbon, as algae is also growing very very fast.

Algae produces a significant quantity of vegetable oil; depending on the species, the type and quantity of this oil varies, and scientists could pick those species which produce what is needed for making jet fuel or diesel. Jet fuel and diesel are used mostly for large trucks and contribute greatly to the pollution of our planet, so developing this type of fuel could be massively important. Also, the overall efficiency of algae is much better than that of corn and palm tree. For example, an acre of corn could produce as much as 18 gallons of oil/year, which is really inefficient; palm oil goes as much as 700-800 gallons/acre. As for algae, they can make as much as 20,000 gallons of oil per year.

So these algae based biofuels could really come in handy, but we are still a long way from producing them. Still, if people started to understand them, and their value, it could be a decisive step towards developing them and directing more and more attention into this valuable direction.