by Mihai Andrei
in Environmental Issues, Inventions
A A 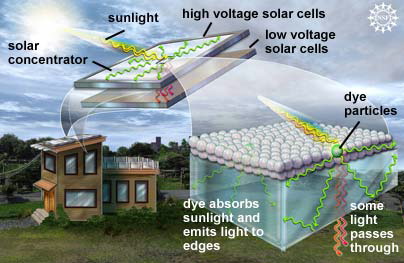 The two major problems of green energy are actually developing the technology and making it cost productive. Both of them are yet to be solved, but scientists are making progress everyday to solve those matters.

Now, MIT engineers say they’ve created a new approach to harnessing the sun’s energy that provide windows with a clear view and illuminate rooms at the same time at low costs which promise to make it highly usable. This solar concentrator collects light from the edges, and dye molecules coated on the glass absorb that light, and then re-emits it at a different wave length.

The light is thus trapped and creates energy while allowing light into the room as well, thanks to this new mixture. Marc A Baldo, leader of the work claims that “the focused light increases the electrical power obtained from each solar cell by a factor of over 40″.

This technology will be developed and commercialized by a new company formed by members of the team who created it, and the system has every chance of being available for purchase in less then three years.