Hyderabad, Dec 5, 2011: Imagine melting of glaciers, ice and snow from the magnificent Mount Everest and other world’s highest mountains in the Hindu Kush-Himalayan (HKH) region as a result of global warming and climate change. 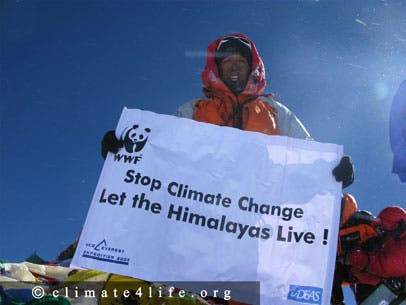 Consequent floods in the mountain ranges and downstream Asia’s major river basins will not only affect the rich biodiversity, but hit livelihood of 210 million people. They include 1.3 billion people who depend on goods and services for food and energy resources there.

Droughts, changes in land use and agriculture patterns and migration trends following the climate change in the mountain ranges.

“Two major land use systems in the region are changing. In mountain forests, tree lines and species are shifting to higher elevations, and species already living at the highest elevations may have nowhere to go. Meanwhile, the vast grasslands of the Tibetan Plateau are being steadily degraded,” a study said.

Considered as the “Third Pole” the HKH region is rich in biodiversity as it is home to 30 per cent of the world’s glaciers, 25,000 plant and animal species, and a diversity of forest types larger than the Amazon. All these get affected if we continue to check galloping temperature rise and climate changes.

This is the alarming signal flashed by the Katmandu-based International Centre for Integrated Mountain Development (ICIMOD in its 3-special  study reports presented at the “ Mountain Day” convened by experts, policy makers, and climate change negotiators on the sidelines of the ongoing UN climate talks at Durban, South Africa.

It was considered the most up-to-date compilation of information on the current status of climate change in the HKH region and the first authoritative data on the number and extent of glaciers and the patterns of snowfall in the world’s most mountainous region.

“The HKH region is like a gentle giant. While physically imposing, it is one of the most ecologically sensitive areas in the world,” said David Molden, director general of ICIMOD. “We must meet the intensity of climate change in these mountains with an equal intensity of will to mitigate and to adapt to the impacts.”

Yet despite an abundance of natural resources in the region, poverty is rife. HKH countries account for 15 percent of the world’s total migration, the reports said.

The ICIMOD-led, 3-year Sweden-funded study titled, “The Status of Glaciers in the Hindu Kush-Himalayan Region,” found   more than 54,000 glaciers in the region spread over 60,000 sq.km using remote sensing studies.

The researchers however could study only 10 glaciers on a regular basis to determine the ‘net loss or gain of ice and snow (called the mass balance).

It was found that the rate of mass balance loss was roughly doubling between 1980 and 2000 and 1996 and 2005. In the Everest area, the data show a marked acceleration in the loss of glacial mass between 2002 and 2005. Glaciers appear to be shrinking in both the central and eastern Himalayas.

Country-specific studies have found that depletion of glacial area over the past 30 years was 22 percent in Bhutan and 21 percent in Nepal. The clean glaciers of the Tibetan plateau are retreating at a faster rate than the glaciers of the rugged central Himalayas, which have higher debris cover which creates an insulating effect, slowing melting.

“This research give us a baseline from which to measure the potential impact of climate change in the region and to develop options for mitigating the impact of dynamic changes the region is expecting in the coming years,” says Basanta Shrestha from ICIMOD.

The second report, which mapped the impact of the glaciers and snow cover, claim that glaciers and snow breathe life into the regional monsoon system and feed the headwaters of 10 major river systems that stretch across eight Asian countries — Afghanistan, Bangladesh, Bhutan, China, India, Myanmar, Nepal and Pakistan.

The report, “Climate Change in the Hindu Kush-Himalayas: The State of Current Knowledge” provides a snapshot of changes occurring in the region on the basis of secondary data available from various earlier studies made.

The researchers noted that the HKH region is one of the world’s hotspots for global warming. The rise in temperature has been greater at higher altitudes and more pronounced during the cooler months than in the warmer months.

This imbalance narrows the seasonal variation in temperature, potentially favoring some plant species over others and already having impacts on agriculture.

Warming across the region is greater than the global average of 0.74°C over the past 100 years. However, this change is not evenly distributed. It is most pronounced in higher altitude areas like the central Himalayas and the Tibetan Plateau. In Lhasa, for example, temperatures increased by 1.35°C between 1950 and 1980.

“From here, greater focus needs to be put on providing people and governments with options for climate-resilient development,” said Molden commented on the basis of the study.

“These include adaptation and mitigation measures such as reducing emissions from deforestation and forest degradation, water storage measures, and regional cooperation around policies for managing water for energy, agriculture and development ,”he added.

We strengthen networking among regional and global centers of excellence. Overall, we are working to develop an economically and environmentally sound mountain ecosystem to improve the living standards of mountain populations and to sustain vital ecosystem services for the billions of people living downstream — now, and for the future, the organization claimed.