Wind has overtaken nuclear as an electricity source in China. Arguably, this is just a temporary situation that will change pretty soon (as China is planning to build numerous nuclear reactors), but the fact that nuclear and wind energy are even on the same scale in China – definitely says a lot. 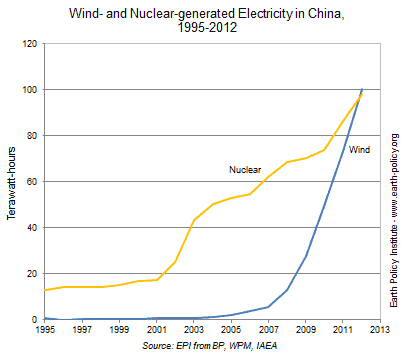 In 2012, wind farms generated 2 percent more electricity than nuclear power plants did, and this is despite the fact that since 2007, nuclear power generation has risen by 10 percent annually – not too shabby, but way lower than wind power’s yearly 80% increase.

Furthermore, the outlook for wind in China is much more promising, and China is way on course of reaching their target of 100,000 megawatts of grid-connected wind capacity by 2015. Looking further ahead, the Chinese Renewable Energy Industry Association (CREIA) sees wind installations soaring to at least 200,000 megawatts by 2020. Their overall resource wind energy resource is staggering. Harvard researchers estimate that China’s wind generation potential is 12 times larger than its 2010 electricity consumption. 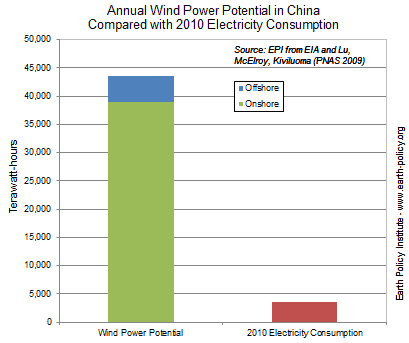