by Bala Murali Krishna Yelchuri
in Animals, Environment
Reading Time: 2 mins read
A A
Share on FacebookShare on TwitterSubmit to Reddit

Hyderabad, Jan 12,2012: A strikingly black-and-yellow snake with horn-like scales above its eyes has been discovered to stun the wildlife enthusiasts world over. 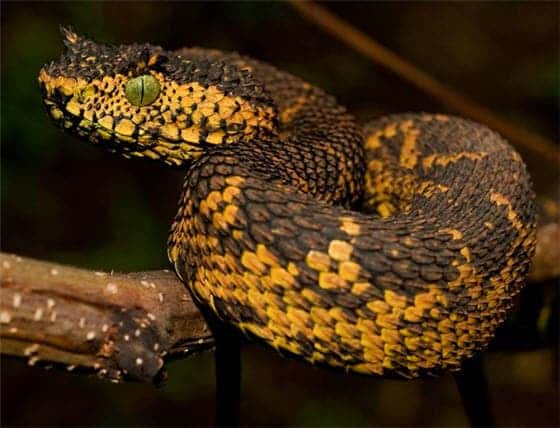 The Wildlife Conservation Society (WCS) has just announced the discovery of the spectacularly colored snake from a remote area of Tanzania in East Africa. The animal, identified as Matilda’s horned viper, measures 2.1 feet (60 centimeters) and looks very majestic with its has horn-like scales above its eyes.

The discovery is described in the December issue of Zootaxa. Authors of the study include: Michele Menegon of Museo delle Scienze of Trento, Italy; Tim Davenport of the Wildlife Conservation Society; and Kim Howell of the University of Dar es Salaam.

Fearing poaching, the authors have kept the exact location of the new species a secret. Its habitat, estimated at only a few square miles is already severely degraded from logging and charcoal manufacture.

The species may soon be classified as ‘critically endangered’ and as such the authors have already established a small captive breeding colony.

The conservationists desire to keep the wildlife trade, both legal and illegal, with its whooping annual turnover of $160 Billion, away from the site so that the scientists could discover more such stunning species in the region.

“Wildlife trade is now the second largest illegal trade in the world after drugs.  Reptiles play a large part in this and unfortunately the illegal trade – especially in wild-caught reptiles – is having a devastating effect on wild populations, the conservations aver.

They maintain that in many parts of Africa, it is the single biggest threat to the existence of many species in the wild. The colourful, fascinating African bush vipers of the genus Atheris are popular pet snakes in many countries. Their natural habitat is seriously threatened and the numbers of wild caught animals destined for the pet trade continues to be unsustainable, they deplore. The snake is named after the daughter of co-author Tim Davenport, Director of WCS’s Tanzania Program.

Together these activities change attitudes toward nature and help people imagine wildlife and humans living in harmony. WCS is committed to this mission because it is essential to the integrity of life on Earth. //EOM//